This is one of three giant oak trees we had to fell due to die back, which is basically a process where limbs start to die and some may fall off. These trees were approximately 35" in diameter and weighed in excess of 10,000 lbs each. 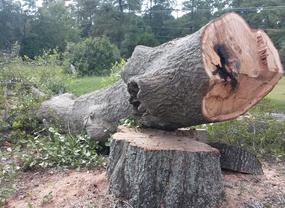 ​This is me (Frank) climbing out on a Bradford Pear in order to dismantle it piece by piece. This limb in particular was hanging over a wrought iron arbor so we were particularly careful not to make contact with it. 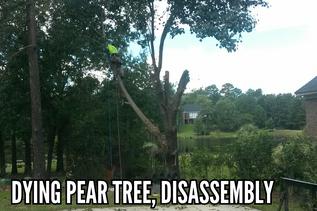 The first image is a street shot of the pond area. There were 7 large Crape Myrtles that we removed and had the stumps ground out for future planting.

Note the two trees directly next to the fence. The customer asked that we remove them and stack up the wood.

These are before and after pictures of storm damage. This large Bradford Pear split in half during bad weather and had to be removed. 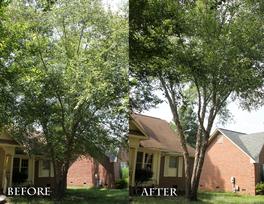 This River Birch had to be cleaned up due to an upcoming roof replacement. 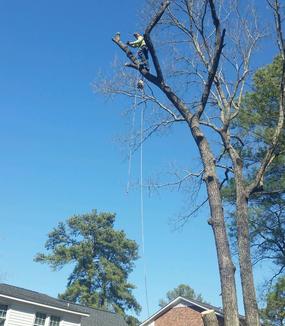 These oak trees were disassembled piece by piece and lowered by rigging line in order to preserve the garden below and avoid contact with the home.