This procedure is called "topping" out a tree. We are able to remove the top portion of a tree in order to reduce the bulk size before we start to cut it down. This is especially effective in limited space where we cannot just drop the tree. We typically leave branches on the ground to cushion it's fall and minimize impact on the grounds.

Pruning out a cypress for our customer, before and after.  Pay attention to the detail and general shape of the tree before and after it is trimmed. We also trimmed out the lower portion of the tree in order to promote light penetration underneath the tree for grass renewal and overall visual appeal.

Here we are topping out another big pine tree.

The customer wanted to keep two of the trees but the rest had to be removed.  Two of the trees were massive Sweetgums, approximately 85 feet tall.  We also removed a large  amount of debris from previous tree projects the customer had started.

We also can help clean up from storm damage. This was a large oak limb that weighed an estimated 3,000 lbs. that broke off during some bad winds at the end of March 2014. 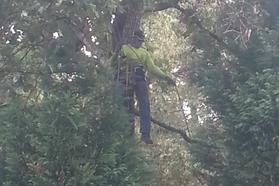 This was a Bradford Pear that split in half during high winds. We removed the tree and ground the stump and roots. Believe it or not we still climbed this one to get it away from the roof line.

This is Frank ascending a tree without the use of spurs/spikes. We can do this upon request so that we do not mark up the tree while removing limbs or pruning.